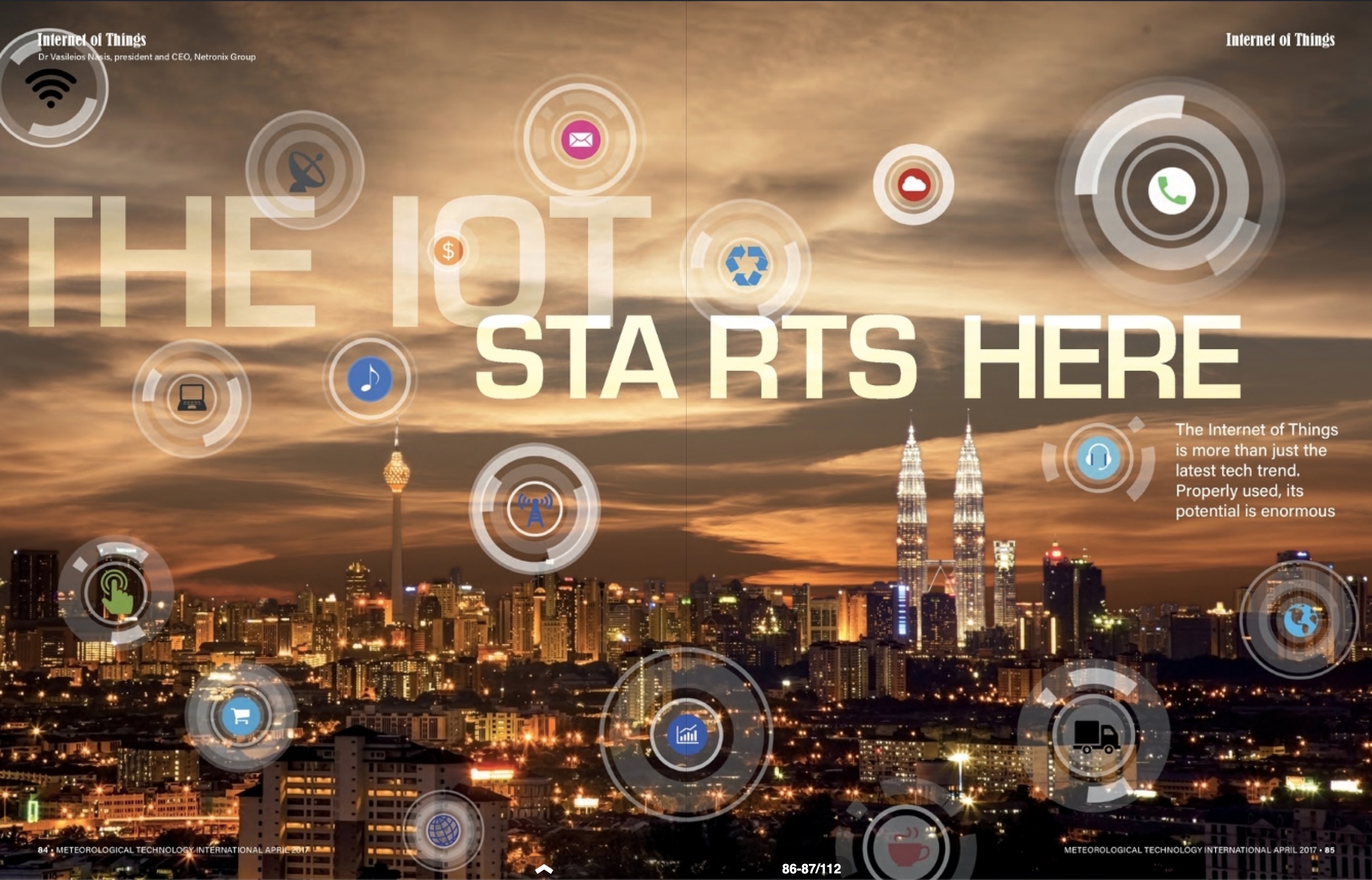 The Internet of Things is more than just the latest tech trend. Properly used, it’s potentional is enormous

Environmental monitoring is a complex task requiring simultaneous gathering and analysis of data from different kinds of sensors set geographically apart. Conventional methods of remote monitoring used over the past 40 years are now outdated, expensive and complicated to set up. We live in a time when millenials consider instant gratification a necessity rather than an option. Similarly, access to data anytime and anywhere is now a necessity. If we can check Facebook, email and the news in real time from our smartphones, we have the means to do just that when it comes to monitoring weather instruments and environmental devices.

The internet of Things (IoT) is perhaps the biggest technological revolution since the invention of the transistor by William Shockley in the 1950s. It is regarded as the 4th industrial revolution, or Industry 4.0, in digital media terms, for its impact on society and manufacturing. In our daily lives we are seeing more and more devices connected to the internet. That is a direct result of the IoT revolution - anything is connected to every thing. This level of connectivity and availability of data translates to one of the most significant achievements of IoT - the democratization of data. Looking back to what is already historical, the evolution of the cell phone helps put the vastness of IoT in context. In 2014 the ITU (United Nations specialized agency for information and communication technologies) estimated global cell phone subscriptions at seven billion. Compare this figure with 50 billion: the number of devices that will be connected to the internet by 2025, with 30 billion of them being connected wirelessly. Marketing has commercialized the IoT in such a way that most people have come to associate it with coffee makers and washing machines ‘talking’ to the cloud. But the realiity is so much more. Beyond connecting people with smart devices in the home, the IoT is also about connecting any type of device to the internet, such as a sensor, a weather station, particle counter, actuator, machine or engine, and having the capability to go many steps further to generate data, analytics, controls, prediction and intelligence. This is connecting anything to everything on a global scale. Like all tech revolutions, new challenges emerge to threaten reliability, credibility and access to data. A decade ago missile attacks were the biggest threat to industrial countries. Today the greatest risk to national security is cyberattacks on large-scale networks. Cyberattacks could jeopardize the country’s infrastructure and economy at its core, affecting everything from the power grid and water distribution networks to national weather monitoring.

Recent research by the Industrial Internet Consortium (IIC) has found that 85% of users and decision makers have yet to understand the profound impact of interconnected systems.

“Looking back to what is already historical, the evolution of the cell phone helps put the vastness of IoT in context”

Most people are not experts in network security, so an informational gap of this kind yields what economists call loss aversion. In other words, rather than riska a potential loss, companies opt for the status quo over change and a possible gain because it feels familiar and safe. End users face a simple decision - Whether to adhere to the status quo by using a local monitoring solution simply because is familiar, or to opt for a remote monitoring solution. In the later scenario, end users reap the rewards of the IoT - the connection of humans with machines. Connectivity is so far-reaching that users of remote monitoring solutions tend to benefit from dynamic analytics and predictive models made possible by data fusion from multiple sources.

The value of the IoT can be measured in terms of its unpcedented level of hyperconnectivity, equipping countries, companies and individuals with the means to idenfity needs. Whether it is through talking cofee machines, cardiac heart monitoring devices in the health sector, or sensorsy devices that predict the future of our environment - all were impossible before cloud computing. The IoT is here to stay!

The IoT and the cloud are the latest technological keywords - that is no secret. Companies have jumped on this technological bandwagon for an obvious reason - the size of the market. In 2009 the global smartphone market was US$55.4bn. In comparison, it is estimated that the IoT will exceed US$30tn by 2030. A recent figure quoted by several industry puts the number of companies arround the world offering IoT solutions at 700. These can be classified as follows:

1. Cloud services: To maintain a competitive edge, many of the traditional cloud hosting providers tried to capitalize on the IoT space by developing application program interfaces (APIs) that facilitate the rapid expansion of dashboards. However, the IoT is not just about dashboards. Nor is it about one thing. It is about everything. These cloud service platforms lack the tools that developers need to create sophisticated solutions. In this sense many early-stage companies use IoT platforms to showcase concept type projects, yet the IoT platform is not being used to its full potential or capability, since cloud services are just one component of the grand IoT architecture. By skipping steps, companies compromise security, innovation and global goals to achieve a quick fix and stay in the game.

2. Gateway devices: For many years, companies have developed gateway devices, which are used to send data from the field to a computer or server either by SMS or some sort of HTTP connection. These companies have changed their marketing approach, while sacrificing the full scale of available IoT technology. To hedge their bets, they also developed APIs to interact with their devices and connect to cloud services, including local applications that run direct from gateways in the field. These solutions are classified as remote monitoring solutions and not IoT solutions, due to limited capabilities and security constraints.

3. Custom applications: Developers next experimented with fusing cloud services and gateway devices, customized solutions consisting mainly of dashboards. The outcome results in substantial initial costs, problematic maintenance, limited functionality and restrictions on the gateway’s capabilities or the cloud platform used. Essentially, if the companies described above existed 10 years ago, they would have been offering the exact same services, classified as ‘remote monitoring services’. In other words, they are providing a retrofit service to the IoT world.

A platform that can be used to addess the needs of the IoT space requires a holistic approach where the data flow may be controlled from the field all the way to the end user. Such a platform requires an infrastructure that makes it possible for hundreds of thousands of devices to connect to each other using plug-and-play technology and full scale use of the cloud. The rewards associated with cloud architecture give rise to secure global communciations, high-perforamcne computation capabilities and data-analytic functions, and a large number of APIs, creating opportunities for developers to produce the right solutions. Netronix, based in Philadelphia, Pennsylvania, has spent the last eight years creating and innovating its IoT platform. Already in its third generation, it consists of three main elements. First is Thiamis, purpose-built hardware that allows any third-party device to become part of the cloud. It enables edge processing, datalogging and seamless communication to Netronix’s backbone cloud from anywhere in the world. It is offered as a peripheral or embedded. Second - and the key to the IoT platform - is Acheron, Netronix’s cloud. Its sole function is to continuously monitor all network operations while providing the most advanced security, data processing, sophisticated task assignment and device management tools. Finally there is a developer-friendly platform called Applications, which features a range of APIs to enable the rapid building of any type of application, such as analytics, dashboards or processes. One such example, developed by Netronix, is Environet, an environmental monitoring application.

Software as a Service

Over 300 integrators and OEMs have used the Netronix IoT platform to generate real IoT solutions for several industries, including the environmental sector.

Environet sets the industry standard in environmental monitoring. By compounding the ability to measure air quality, water quality and weather monitoring using a single platform, Netronix has built the most advanced IoT platform for data access and monitoring anytime, anywhere, from any web-enabled device. Beyond these technological advances, Netronix implements the concept of software as a service (SaaS) and a subscription payments system in a single business model. Like all new tech launches, products are often expensive in the initial stages. Netronix conquered this challenge at the outset by availing itself of a subscription payments system that is beneficial to the end user. As devices get smaller and faster and require less power, the costs of initial investment fall. This also creates a new recurring revenue stream for OEMs and integrators in the form of IoT value-added services, which are predicted to triple to upward of US$120bn between 2012 and 2018. The marriage of Thiamis and Environet means that anyone, anywhere in the world, can set up any number of devices in the field to measure any type of parameters using plug-and-play tech. That is the power of a real IoT platform.

More than one winner

In 1685 Sir Isaac Newton wrote Principie Mathematica to discuss open-ended problems related to physics and mathematics. Newton’s book foretold the end of the scientific revolution, and all his problems were carefully crafted so as not to provide conclusions. In this way, his work could not be contradicted later. On the bring of Industry 4.0, we find ourselves in a similiar situation. No one really knows the precise impact of the IoT on our everyday lives. What we do know is that the IoT market is growing at a much faster pace than anticipated, with annual growth exceeding 60%. We also know that our data-driven society is creating the need for access to information, making the possibilites endless. There will be more than one winner. Companies must take a look at their respective markets and product lines and ask, “What if?” Most of the sensors in use today were designed for a different era. They require interfaces for the end user to be able to configure the device and extract the data. As a result only 10% of the device’s hardware is actually used for the measurement of real data, making the device more complicated and expensive. In the IoT era, the end user does not need to interact with the device - only with the data. The device just needs to interact with the cloud. What if we had the ability to redesign sensors with IoT in mind? They would be smaller, cost-effective and always connected to the cloud. Whatever your IoT destination, Netronix can get you there.