Air pollution inside my house could kill me. What are you breathing in at your home? 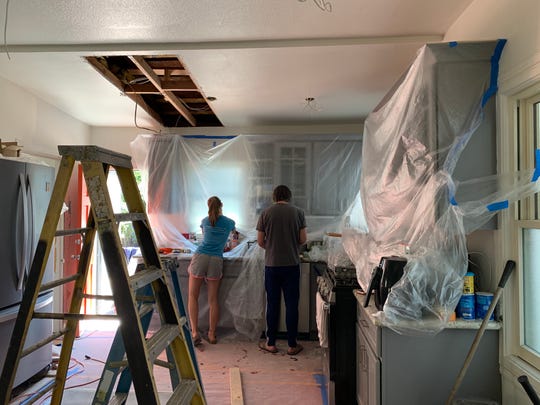 How clean is the air as the family makes lunch during renovations? (Photo: Jennifer Jolly)

The air pollution inside my house could kill me. That’s what I’ve learned after testing a handful of new high-tech indoor air quality monitors. Are you in the same boat – er, room?

Research shows 96% of homes have at least one type of indoor air quality issue. Everything from cooking to blow-drying your hair can cause problems.

According to the EPA, most of us spend 90% of our time indoors, exposed to air that is up to five times more polluted than outdoors. That can trigger allergies and asthma, affect child development, disrupt sleep, and more.

“Most people have no idea how polluted the air is outside of their house, let alone inside,” says Vasileios Nasis, Ph.D. and founder of Netronix Inc. “It sounds alarmist – to say indoor air quality could kill you or make you seriously ill – and people tend not to believe it, but it’s happening, and people have the power to stop it.”

Nasis hopes his company’s $699 gadget called Airthinx will be just the fix people need. Not only to learn more about the air they breathe every day but also how to do something about it.

“For outdoor air quality, you need government policy to change it. But you can control the indoor air quality in your own space and change it on a personal level right away,” Dr. Nasis tells me over the phone.

Most people have no idea how polluted the air is outside of their house, let alone inside.
Vasileios Nasis, Ph.D. and founder of Netronix Inc.

The Air Quality Monitoring Market is expected to exceed more than $7 billion by 2024.

It’s been one of the biggest new areas of personal health gadgets I’ve seen since the flood of activity trackers. Could monitoring the air we breathe become the next big health tech trend after the Fitbit or Impossible Burger?

“Yes, except I don’t think it’s a trend,” Shelly Miller, a professor of Mechanical Engineering at the University of Colorado, Boulder tells me. “These new, lower-cost sensors are a critical development in improving public health, and I think they are here to stay.”

Plugged into a power outlet like a nightlight, sitting on a shelf like a book, or attached to a wall like a thermostat, these Wi-Fi and Bluetooth-connected gadgets monitor indoor air quality 24⁄7. Many of them also have a traffic light type display on the device itself that glows green (good), yellow (caution), and red (alert).

Putting them to the test

There’s no better testing ground than my very own new (to me) home. It’s an 1888 Victorian that sits in a pocket of some of the worst outdoor air quality in the entire United States.

We’re a few blocks away from the Port of Oakland, sandwiched in an industrial area between major freeways. Diesel truck traffic, massive cargo ships, trains, recycling and wastewater treatment plants – all of it – belching invisible particles nonstop into the air and, eventually, into our lungs. Add to that stirring up 131 years of ashy-like dust renovating this old house, and there’s no telling what we’re going to find in our air. 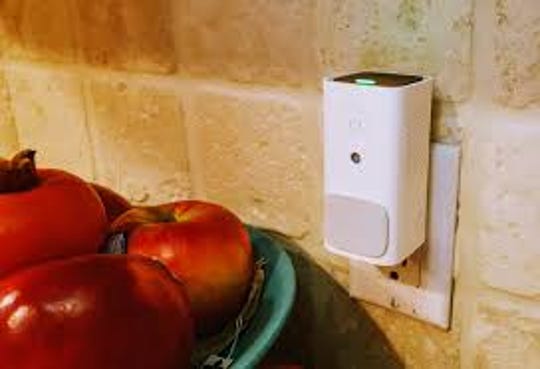 Great for starting out

The Awair Glow C is just slightly larger than the average nightlight – which is good because you can also use it as a nightlight – and plugs directly into a power outlet. It monitors the basics, including humidity and temperature, and gives a reading of various chemicals floating around in the air. It uses those readings to provide a high-level overview of a home’s air quality and can trigger a fan or air purifier plugged into the power outlet on the front of the device.

Overall, it’s the least sophisticated, yet simplest for the general consumer. It told us we need to keep an eye on the humidity levels, or risk growing mold and farming dust mites.

The Plume Labs Flow is a portable air quality sensor that monitors airborne chemical levels and particulate matter both indoors and out, which is really interesting to see how living in an armpit of poor outdoor air pollution impacts the inside air. It also tracks changes over time and sends alerts when things take a turn for the worse.

The Plume app is intuitive and quickly shows the levels of chemicals and nitrogen dioxide – plentiful in vehicle exhaust and even stir-fry smoke, and a likely culprit of everything from poor sleep to headaches. It also alerts us to high humidity, right about the same time we discover a leak in the roof just above the kitchen area where these devices are plugged in. 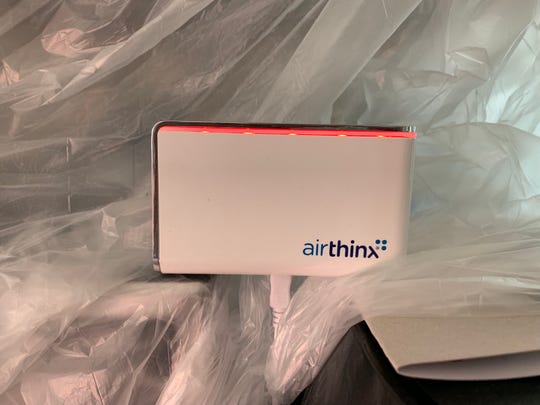 But if you’re really serious…

If you think of the Awair Glow C as a car that gets you to a clean air destination in the most basic way possible, the Airthinx IAQ is more like a fighter jet.

Yes, the Airthinx unit monitors the basics like temperature, humidity, and chemicals, but it also does a whole lot more by sniffing out the tiniest particles drifting through a living space. These microscopic specks are called particulate matter, and depending on their size, they can stay afloat for weeks. This includes things like dust, fungi, pollen, and even bacteria. The levels of particulate matter in the air can change dramatically within hours, signaling a rise in mold growth or outside winds pushing pollutants into open windows.

The gadget feeds all of that information into a cloud-based dashboard accessible from anywhere, seeing up-to-the-minute reports on air quality. Trouble is, it’s so detailed that I have no idea how to interpret the data on my own.

“Ah, you seem to have the perfect storm of poor air this week,” Dr. Nasis says when I call him back to translate the Airthinx readings for me.

It’s true, the renovation going on right now includes finding that leak in the roof, drilling holes in ceilings and walls, installing tile, painting, and so. much. dust.

“Every day around 6 p.m., there are a lot of particles and high VOCs and that might make you feel dizzy. Specifically on Monday around 6 p.m., it was really bad with high formaldehyde, too. Perhaps something plastic was burning, or someone sprayed an aerosol?”

That’s when the real sleuthing starts. We’re priming and painting our walls, which could be to blame. Our contractor also removed old foam insulation from a half bathroom right next to our kitchen this past week. During the 1970s, urea-formaldehyde foam insulation (UFFI) was the go-to for any homes, and since that’s the last time this home was renovated, that’s also a likely source of icky air.

But my husband was cooking on our gas stove during those specific times as well. According to the EPA, gas stoves and ranges are a common cause of poor air quality.

The air quality is better already, but I wouldn’t have figured it out without Dr. Nasis’ help. 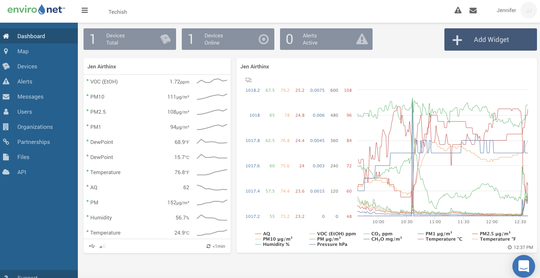 Airthinx IAQ laptop dashboard is way too complicated for me to figure out quickly on my own. (Photo: Jennifer Jolly)

Knowing your air quality is bad is one thing, but understanding why it’s bad and how to fix it can take some serious detective skills, and in some cases, more than a basic understanding of the role of various pollutants in your space. That’s the biggest weakness in all of these consumer air quality monitors so far.

“This information is really complicated,” professor Miller says, “They all should have good customer service because most people need it.” She said of the devices she’s tested out, Airthinx has the best support overall.

“This information is really complicated,” professor Miller says, “They all should have good customer service because most people need it.” She said of the devices she’s tested out, Airthinx has the best support overall. “With all of these devices, I always check to see if they have a good user interface, how responsive their support is, and whether they have independent, third-party studies to show how accurate they are.”

The night we almost died

Even as studies drawing links between poor air quality and tens of thousands of deaths continue to pile up, most of us don’t think too much about air quality until it gets really bad. Or almost kills us.

That’s what happened two winters ago, when my family experienced a series of strange illnesses that culminated with my husband in the emergency room after a weeklong debilitating migraine. The whole family was experiencing headaches, nausea, sleepiness, and body aches, and we soon found out why: The 100-year-old disintegrating gravity furnace in our rented home had been spewing toxic exhaust into our space for months. (Our former landlady apparently forgot – her words, not mine – to fix it for at least a year.)

When gas-company crews came to inspect the entire system late one night, after I felt especially sick and thought I smelled “gas” in the air, the technician told us carbon dioxide (CO) and carbon monoxide (CO2) levels were so high, especially in our bedrooms, that our family “might have made it until morning.” Our carbon monoxide detector had not gone off, and it seems all of the indoor air quality monitors I’ve now reviewed could have tipped us off, long before any of us got sick.

Jennifer Jolly is an Emmy Award-winning consumer tech columnist. Email her at jj@techish.com. Follow her on Twitter: @JenniferJolly.